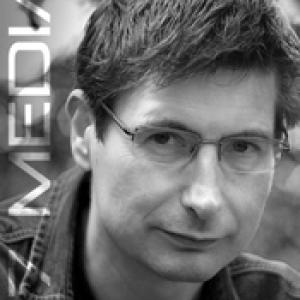 Alistair Lock is a well-respected audio professional best known for his work on the all-new Blake’s 7 audio adventures and the Big Finish Productions’ series of officially-licensed Doctor Who audio plays, which more than one reviewer described as ‘cinematic’.
His association with Blake’s 7 dates back to when he was the director/sound designer on Magic Bullet’s controversial Kaldor City series, an ultra-violent tale of power, sex and intrigue inspired by Blake’s 7. He is now best known as the voice of the synthetic intelligence known only as Zen.
Prior to this, he has worked on a number of independent Doctor Who stories produced during the television series’ hiatus. Credits include BBV’s Doctor Who spin-off audio plays, notably “Republica” and “Prosperity Island”, along with direct-to-video releases, including “The Airzone Solution”, “More than a Messiah” and the “Auton” trilogy series. He also did post-production on the popular UNIT video story “Downtime”.
Alistair is also an accomplished composer and has provided scores for Sapphire & Steel, Doctor Who and Bennie Summerfield audio adventures. Other music credits include the infamous remix of Madonna’s Open Your Heart.