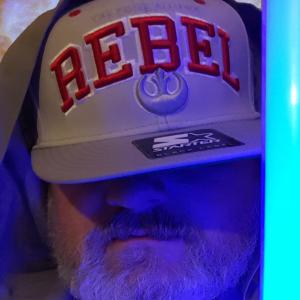 In his younger years, rapping helped Luke Skywalker cope with his harsh life on a moisture farm. From rapping out a few lines in the oppressive heat of Tatooine, Luke became a force to be reckoned with. Soon he was rap battling Mos Eisley's finest in grubby cantinas throughout the spaceport. His rise to the Jedi Order put a stop to further rapping ambitions for a time. Now, through a recently signed deal with Mini Darth Productions, MC Luke Skywalker is back...with his mic-sabre.

Jackson Griffiths grew a beard to look like Luke Skywalker and is the caretaker of Mini Darth. He loves music in all its forms and is a Star Wars fan. Jackson Griffiths's geek life was transformed positively on finding the Science Fiction social group The League of the Non-Aligned (LOTNA). Over the past few years he has rapped at their parties.
Twitter: @mini_darth @BrubeckerIIIJnr
Facebook: https://www.facebook.com/MiniDarthHello/